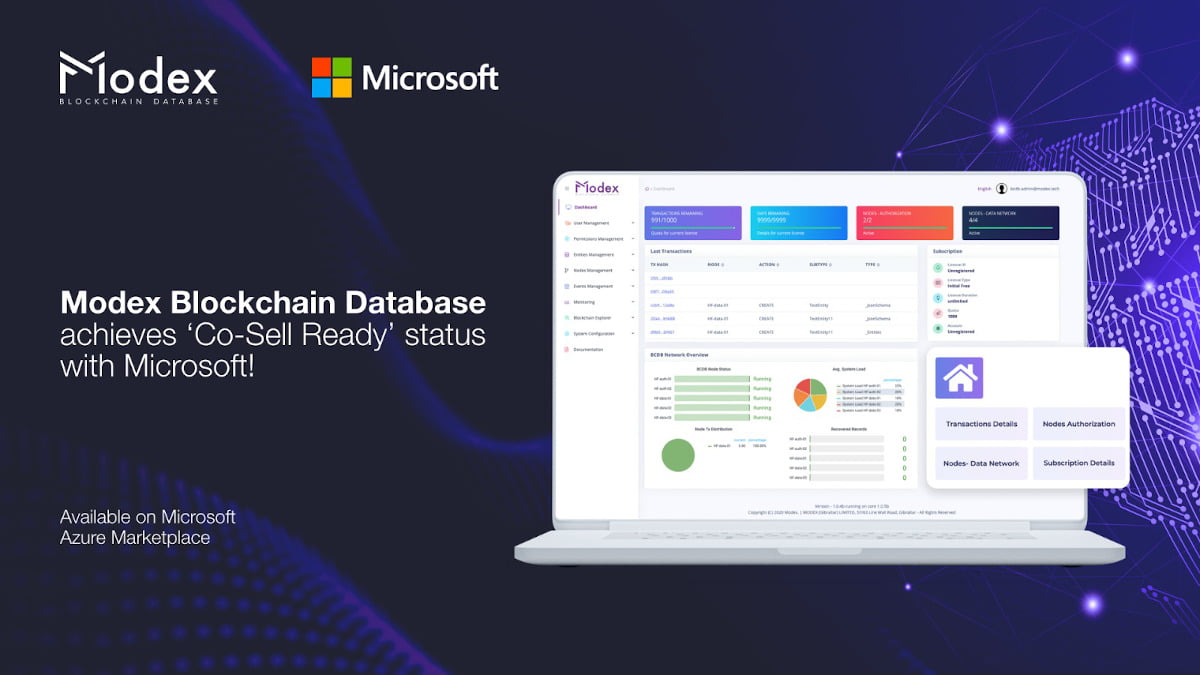 Modex, the leading Blockchain Database provider, has earned the Microsoft ‘Co-Sell Ready’ status, which enables the company to access new markets with an expanded portfolio of solutions and drive innovation by creating custom solutions with Microsoft and partner-to-partner opportunities.

This top-tier partner status allows Modex to enter a select community with special access to co-sell resources and the worldwide Microsoft sales team, marking an important breakthrough for a company focused on blockchain technology.

“Leading companies in every industry are partnering with us to build their own digital capability to compete and grow. This is creating broader opportunities for everyone, including our ecosystem. As one example, the co-sell program we introduced 18 months ago has already generated $8 billion in contracted partner revenue”, said Satya Nadella, Microsoft CEO. The following numbers speak for themselves: 435 Co-sell ready startups, $1.2B+ in pipeline opportunity, 1,897 Co-sell wins and $300M+ annual contract value.

The importance of a co-selling agreement with Microsoft translates into companies entering new markets with an expanded portfolio of solutions, while having access to the global partner reseller network. Such a partnership drives innovation forward as companies can create custom solutions with Microsoft and partner-to-partner opportunities. Moreover, a company can collaborate with Microsoft sellers to generate leads, amplify marketplace listings, and close deals.

When it comes to co-selling with Microsoft, there are three channels:

Achieving this status brings a suite of advantages for Modex. First of all, our company can showcase its products and services directly to customers and be discoverable to sellers through the commercial marketplace. Modex can also leverage the Microsoft brand and global footprint to build customer trust and strengthen existing relationships with its partners and clients.

Besides expanding the customer footprint, Modex can enrich customer offerings with the company’s know-how, and create sales strategies and account plans through better-together selling. In addition, Modex is now able to use programs and partner resources which help speed up the time to market and generate demand for the company’s products and solutions.

“Achieving Microsoft ‘Co-Sell Ready’ status represents a major milestone for our future growth and the proof of a powerful partnership. We are thrilled to be part of the Microsoft ecosystem and we are excited by the opportunities ahead. We believe that blockchain has the potential to reshape traditional business models and with this achievement, we are moving closer to our goal – to make blockchain technology available for every person or organization – using our trademark solution Modex Blockchain Database (BCDB) as a blockchain enabler in Azure”, said Mihai Ivascu, CEO and Co-founder Modex.

“In 2016, Microsoft launched the ‘Co-Sell Ready’ status for its partners, thus giving them full support for building demand, sharing sales leads and delivering marketplace-led commerce. This status also enables access to a large community of Microsoft-managed customers to collaborate on joint selling opportunities. Recently, this status was granted to Modex, a company founded by Romanians which revolutionizes blockchain technology, focusing mainly on the enterprise sector. Looking ahead, we would like to see even more companies emerging from Romania accessing the benefits of this partnership. We are looking forward to collaborating with Modex to jointly bring innovation and newfound value to our clients and partners”, stated Daniel Rusen, Marketing and Operations Director, Microsoft Romania.

Modex and Microsoft, partners for innovation

Two companies driven by innovation, Microsoft and Modex already have a history of partnering in order to bring to the market products and services which benefit companies and end-users alike. The next step in Modex’s partnership with Microsoft is integrating Modex BCDB immutability features in M365 Compliance Center.

At the end of 2020, Modex’s flagship product – the Blockchain Database (BCDB) trademark solution – has been integrated with Microsoft Azure, one of the most important cloud computing providers available on the market. As a result of this technological integration, Modex offers its middleware software as an IaaS offering on the Azure cloud for clients and potential clients who wish to deploy a Modex BCDB infrastructure on their Azure cloud subscriptions to set up a hybrid infrastructure that fuses blockchain technology with the cloud.

The publication on the Azure Marketplace sets the stage for the next phase of the Modex plan – to transform the BCDB product into a complementary solution that connects the Azure database services with the Azure Blockchain offering. By acting as a bridge that connects multiple Azure solutions, Modex BCDB will answer the needs of Azure clients who wish to customize their businesses by joining multiple Azure services, without needing to invest time and other resources for developing a custom connection.

The Modex BCDB – Azure integration sees the BCDB product published as a solution template on the Azure Marketplace. A solution template is a powerful tool that helps Azure subscribers set up multiple services and infrastructures connected by networks while also acting as a mechanism through which beneficiaries can install and configure a collection of machines. In short, it’s a more complex solution that helps Azure subscribers quickly deploy multiple services.

Through the Modex BCDB solution template, Azure subscribers are just a few clicks away from setting up and configuring their own Modex BCDB infrastructure. Once a set of minimal information has been passed in the installation interface, and the deploy button is hit, the Azure platform takes over all the heavy lifting and allocates all the hardware required for the backend processes. After the automated setup process concludes, the beneficiaries have a fully deployed BCDB infrastructure and workbench at their disposal that can be used to add a blockchain backend to their applications.

Modex, part of the Microsoft for Startups program

Also in 2020, Modex has been accepted into the Microsoft for Startups program. This gave Modex direct access to the latest Microsoft technologies, resources and technology advisors, enabling us to accelerate our go-to-market strategy, and to work together with the Microsoft team in addressing common customer’s needs. Two years ago, Microsoft announced an ambitious goal to become the leading enterprise cloud for B2B startups in the world.

Called Microsoft for Startups, this founder-first program delivers the technology, go-to-market and community benefits needed to catalyze startup success. Since then, the industry has seen tremendous growth among B2B tech startups. So far, thousands of startups from more than 140 countries have connected their game-changing solutions to Microsoft’s enterprise customers. In addition, Microsoft has pledged 500 million dollars to support startups with access to technology, community spaces, and sales opportunities over the next few years. The acceptance in the Microsoft for Startups program offers Modex access to products and services, as well as startup-focused resources to leverage Microsoft networks and expertise. TopDevelopers names Modex as one of the top Blockchain Development Companies

TopDevelopers – a dedicated directory of IT service providers – has included Modex in their list of “Top Blockchain Development Companies“.
Read more 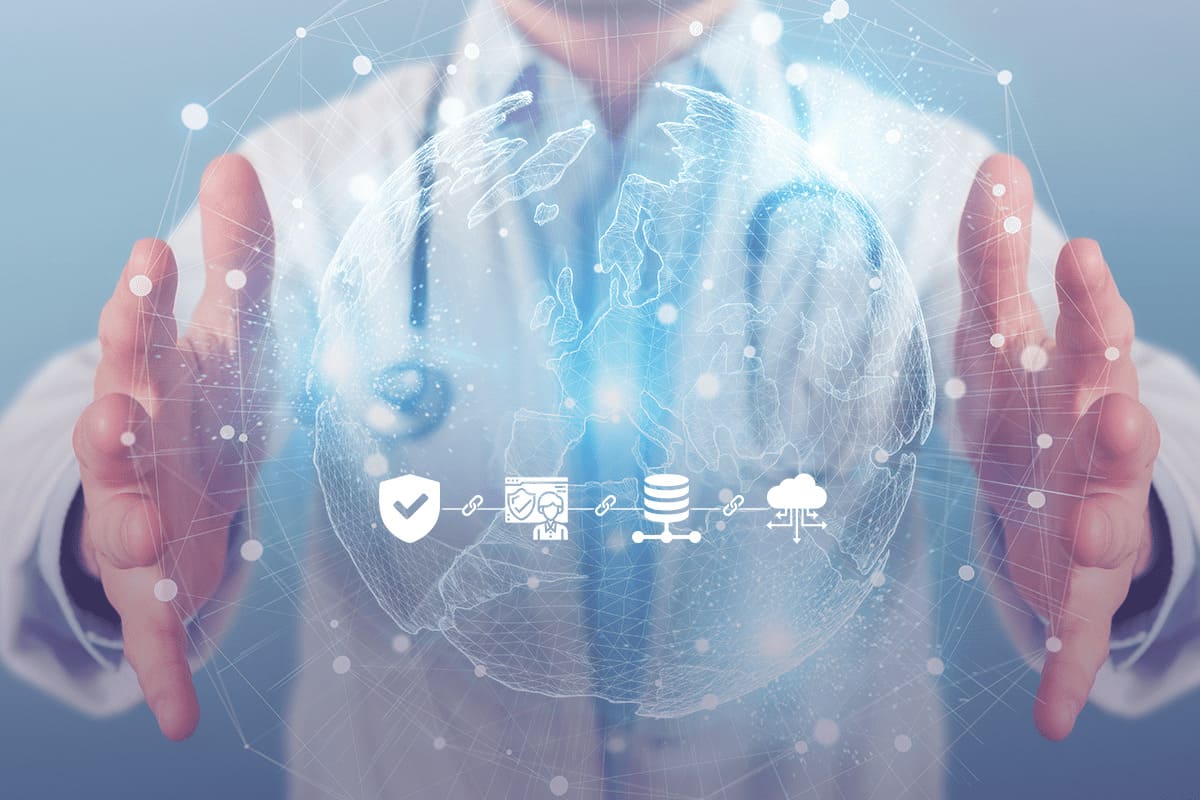 Modex BCDB technology for the healthcare system, recognized by an academic paper

The Modex Blockchain Database (BCDB) solution has been recently featured in “PatientDataChain: A Blockchain-Based Approach to Integrate Personal Health Records”, an academic article that showcases how the technology developed by Modex can act as a foundation for PatientDataChain.
Read more

Modex, the leading Blockchain Database provider, has earned the Microsoft ‘Co-Sell Ready’ status, which enables the company to access new markets with an expanded portfolio of solutions and drive innovation by creating custom solutions with Microsoft and partner-to-partner opportunities.
Read more